For many years, a once productive Sault Ste. Marie farm sat idle on the corner of Shunk Road near 5 Mile. The barn succumbed to ruinous effects of pounding rain, wind, snow and Father Time. It once provided milk, poultry and other agricultural products to area markets. A stoutly built gothic style barn housed dairy cows and turkeys and had a large hayloft with a solid pine floor. 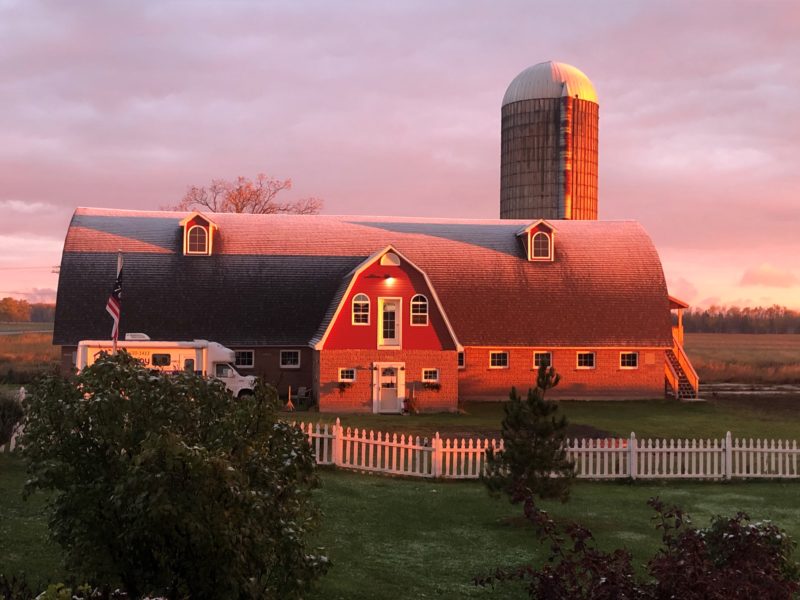 The inevitable appeared to be near for the abandoned property.

Then along came Bruce and Jill Lynn. As self-described history buffs, the couple had a penchant for restoring historic homes. They had done so with other properties, including an 1830’s home on Mackinac Island and an 1880’s Queen Anne style home in Cheboygan.

In 2011, Bruce was working as the Executive Director of the Great Lakes Shipwreck Historical Society at Whitefish Point, absorbing all he could about the history of the Point and tales of shipwrecks. Jill had just returned from a tour of duty in East Africa as part of the Army Reserves. They were looking for a place to relocate. As they searched around the area, they decided they might to call the Shunk Road property home.

“It was kind of a whirlwind tour of available properties and this kind of stuck out for us; we just had a good feeling about it,” Jill recalls. The property included a home she says had the character of a 1940s historic home combined with modern improvements and an addition added in 2007.

“It had so much character,” says Jill of the abandoned farm. “And even though we knew it would be a lot of work to get it to the place we wanted it, we were drawn to it.”

At the time they purchased it, the Lynns were unsure how they would come to use the old barns but realized that at least they would have lots of storage space, Jill recalls with a chuckle. Jill, a veterinarian, eventually started a mobile veterinarian clinic and realized the largest, Gothic-style barn could be utilized for her business and other purposes.

They focused their attention on the Gothic style barn not far from the house to start the renovation. It needed a new roof, siding and windows – and that was just for starters.

“The bones of the structure were stout,” says Bruce, who grew up on a Century farm in Ohio and has a Masters in Historic Preservation from Eastern Michigan University. However, he said another 10 years of neglect and it could have gone the way of many old barns.

Many contractors were hesitant to work on the roof due to inherent dangers. Eventually, they employed Bonacci Construction to replace the roof and stop leaks that were about to ruin the solid pine floor below. The whole barn needed new electrical service which was provided with the help of Cloverland Electric Cooperative. With essential repairs in hand, they focused on creating office space for the mobile veterinary clinic. There is now a reception area where the milk house used to be with a staircase leading to Jill’s office located above.

Of the other two barns on the property, the barn that once housed horses was painted barn red and is currently used for storage. A third barn with a sheet metal exterior was donated to an Amish family who disassembled it in a day and a half and moved it to a farm in Engadine.

“It’s opened our view of the backfields for us,” says Jill of the removal of the old sheet metal barn. A deck built on the second floor of the Gothic barn now provides a nice view of the morning sunrise. “My dad and uncle built this for us so we can enjoy the view,” says Jill, whose clinic has grown so much that she is unable to take new clients. She said the deck also offers a peaceful place for grieving people who have had to bring their animals in to be euthanized.

The largest gothic barn has the potential to become a multi-purpose building. The second floor, which was once filled with hay, has an interesting cross-work of beams above and looks more like a basketball court now. In fact, there is a basketball hoop set up that employees can use during breaks. They also use this space for animal rehabilitation. Jill, who is still active in the Army Reserves, uses this space for dryland training. Recently, one of her employees held a wedding in the renovated barn which was decorated to the nines; the couple took their vows under a beautiful chandelier the Lynn’s picked up in Harbor Springs.

Victor “Chum” Hillock grew up on the old farm and lived with his wife Lois across the street when the Lynn’s moved in. The Lynn’s were able to get to know the Hillocks before they passed away in 2019. They said the couple was happy to see the old place restored.

“Chum and Lois were very excited to see us working on it, trying to bring it back to its former glory,” says Jill. Apparently, a lot of folks in the area are happy to see it revived.

“People stop by and say they spent their childhood playing in the hayloft,” Jill says. “It’s fun to see them come by and share their memories.