October is National Co-op Month. As a Cloverland Electric Cooperative member, the value of co-op membership is visible each morning as you flip the light switch on, start the dishwasher, work on a computer and watch TV. However, the intrinsic value of co-op membership goes beyond electricity – and into the heart of the co-op business model. As a Cloverland member, you are an owner of the co-op. The co-op doesn’t answer to large investors outside the Eastern Upper Peninsula (EUP) – it belongs to each of us who call the EUP home. The co-op is managed locally by a board of directors who reside in the EUP and invest their efforts to ensure Cloverland continues to provide reliable and affordable energy to all residential and business members.

Local ownership means Cloverland members have a responsibility to ensure energy continues for future generations. Cloverland’s board listens to member-owners and provides direction to co-op employees. Cooperative employees mitigate challenges of today while preparing for the potential of the future. The cooperative has embraced new opportunities to harden infrastructure and encourage growth for the future.

Cloverland Electric supports all entities involved in bringing broadband to the Eastern Upper Peninsula (EUP). While the co-op is not leading the charge, it is instrumental in supporting a collaborative of entities such as tribes, school districts and other groups to help reach the end goal of bringing broadband to EUP residents who are also Cloverland members.

The cooperative has an agreement with Atlantic Engineering Group (AEG) to replace Cloverland poles and install fiber optic cable on them. AEG was awarded the investment in broadband from the Federal Communications Commission through its Rural Digital Opportunity Fund (RDOF) auction. The co-op’s goal is to link its 38 substations with fiber optic cable to reduce co-op costs and enhance security of its grid. The benefit to co-op members: lower costs, security of Cloverland’s grid and ultimately, stimulate high speed internet for EUP residents. 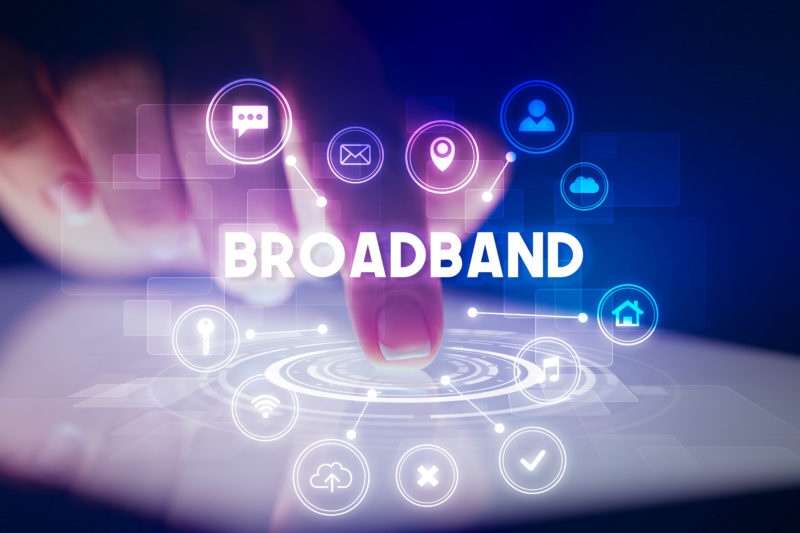 Meanwhile, the EUPConnect Collaborative (EUPCC), a consortium of community anchor partners such as townships, counties, tribes, K-12 school districts, libraries, higher education institutions, and hospitals is working as a facilitator to leverage funding opportunities and partnerships. The creation of a twenty-first century broadband infrastructure to every 911 service address throughout the EUP for all residents, businesses, utility companies, governmental units and institutions at a competitive pricing structure by 2025 is the goal. EUPCC is lead by EUP Intermediate School District (EUPISD)’s Director of Technology, Jason Kronemeyer.

“To be safe, secure and connected, we have to address the needs of our utility first. Our electric cooperative provides service to almost every meter throughout five counties,” said Kronemeyer. “We looked at how do we get our utility involved in the broadband game – or do we want our utility in the infrastructure game? If we’re building partnerships around infrastructure, then our utility gets the private infrastructure it needs to secure its electric grid and maintain command and control region-wide.”

Getting the cooperative involved in the infrastructure conversation and sharing plans on development has been a key component to the process. Not only does broadband enhance security for the co-op’s grid, but Kronemeyer sees broadband as the win-win solution to address the needs of government, education, healthcare and private partners to secure separate strands of fiber across the EUP.
“When we are done, the electric cooperative will have a full private infrastructure and everyone in the EUP will have access to broadband in their home. Once we have interconnected all those areas with resilient infrastructure, then the last mile out to the home takes care of itself,” says Kronemeyer.

Another EUPCC partner includes Merit Network, an independent non-profit research and education network governed by Michigan’s public universities. Merit was awarded a $2.99 million grant to support construction of 70 miles of middle-mile fiber optic infrastructure in the Upper Peninsula. Currently, EUPCC is partnering with Merit’s Michigan Moonshot initiative to survey all EUP residents to identify gaps in infrastructure and inform local community planning process to maximize investment for its communities.

All EUP residents are encouraged to participate in the EUPConnect Broadband Infrastructure survey at merit.edu/EUPConnect/ Learn more about EUPConnect Collaborative at eupconnect.org.

As technology evolves and expands into every aspect of our cooperative and we continue to move towards an all-digital world, the need to secure the devices, systems and data is a critical function of the information technology department at Cloverland Electric Cooperative.

With October being Cyber Security Awareness month, it is a good time to reflect on the important elements of any technology security program and importance of keeping data and information safe. Protecting information requires two key elements: 1) limiting access to control and 2) making backups of systems and data stored within.

Access controls work on many levels, from strengthening usernames and passwords, to using security devices such as routers and firewalls to separate networks to physically cutting the connection. Critical technology used to control power plants, power grids or other critical systems are run on networks that cannot access the Internet nor be accessed from other networks within the co-op. Physically separating these critical systems ensures only specified personnel can access the systems.

Maintaining proper backups for systems and data ensures ongoing information security in the event of equipment failure, disasters or a cyber event, such as ransomware. To provide reliable protection, backups are completed regularly with copies stored in multiple locations to remain impervious to destruction. Finally, backups need to be verified and tested to ensure information can be recovered and restored to functional systems.

These basic practices are applied every day at Cloverland. But they need to be in use in every member’s business or home as cybercrime has grown exponentially in the past five years and the majority of the victims are small businesses, schools, hospitals and individuals.

We wanted to share responses to one member’s questions with all co-op members:

We are adapting to the requirements necessary to support electric vehicles, but it will take time. We anticipate demand for EVs in the EUP will be slower than other areas of our state, which supports our preparation efforts. However, we still need to support the state’s plans to prepare EV chargers to support travel and tourism.

In general, distribution and transmission grids are designed and ultimately constructed to manage varying levels of electrical demand (referred to as capacity) based on the foreseeable time respective area of the system was implemented. The rural electrical system where we live and work was designed and constructed for northern Michigan demographics and weather – long before electrical demand for electrical vehicles was a consideration. Furthermore, the Cloverland that exists today is a combination of utilities that merged over time and each had its own design standards. Adding to this complexity is deregulation of electric markets creating regional transmission providers such as American Transmission Company that own and control of transmission grid planning and upgrades. A shift from fossil-based fueled vehicles to all electric vehicles will require decades of planning and implementation to support it, as well as significant financial investment.

What plans are in place to preserve members’ costs for energy? How does renewable energy help?

Cloverland’s fuel mix consists of 40 to 50 percent renewable energy (both the co-op’s hydro plant and the US Corps of Engineers hydro plant) and the remaining half is purchased through a long-term purchased power agreement with Wisconsin Electric Power Co (WEPCo) until 2029. Our supply is based on cost of energy produced (kilowatt hours) and cost of capability to produce energy (demand or capacity). These supplies are dependent on cost of input fuels and amount of fuels utilized. Both hydro costs and WEPCo costs have increased. However, neither of these supplies are affected as significantly by fossil fuel price volatility that the world has encountered recently due to many factors, which allows us to keep our rates more affordable compared to other utilities in our state.

As a member-owned electric cooperative, Cloverland strives to provide a balance between reliability and cost. Cloverland has held its rates fixed since 2017. This stability was accomplished through the combination of cutting capital expenditures and focusing on power supply costs. Despite its unique fuel mix, Cloverland’s system requires continual improvements to maintain its infrastructure and service reliability. The growth of subdivisions and residential expansion combined with small areas of commercial growth across the EUP requires ongoing system improvements. Cloverland’s hydroelectric facility has been in operation since the early 1900s. Understanding the challenges that comes with the age of the facility, Cloverland commissioned a series of studies to help management better define the capital needs of the cooperative that were factored into the recent cost-of-service study. Cloverland’s focus continues to be on our largest expense item which is our power supply costs as it can yield the greatest benefits on rate stability.